Why is background knowledge important? 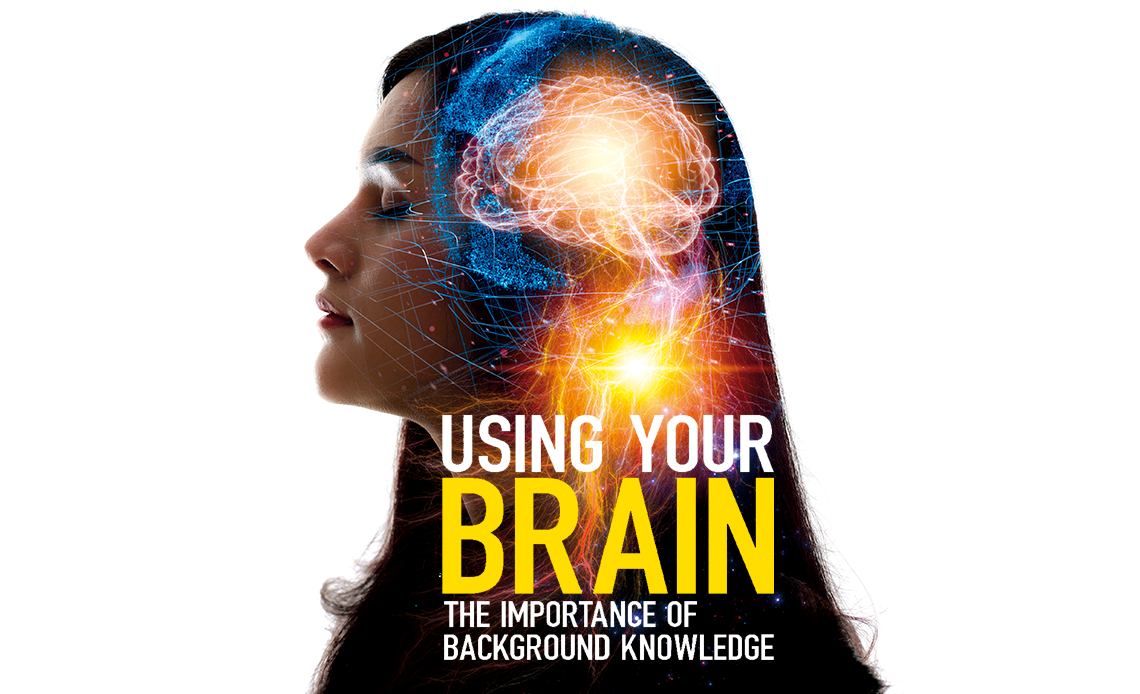 If I had to reduce all of cognitive psychology to one principle it would be this: the most important single factor influencing learning is what the learner already knows. Ascertain this and teach him accordingly.

This is a quote from a cognitive psychologist and it sums up perfectly what is known about how we learn: we use what we know already to learn new things. The importance of what the learner knows already to academic achievement is well established. Marzano (2004) reports on the very strong relationship between previous knowledge and how well children do in school. In English language teaching, Nation (2006) concludes from his research that learners need to know approximately 98 percent of the words in written or spoken language already in order to understand what they hear or read well. Overall, research overwhelmingly shows that students who already know about the topic will learn readily and well, while students who do not have sufficient background knowledge will not learn well.

Cognitive psychology and the development of the field of neuroscience have both helped us to get a better idea of how the brain works and consequently how we learn. Since about 1990 and the advent of fMRI and other brain‑scanning technologies we have been able to see and understand better the relationship between what we know already and new information to be learned. For example, Van Kesteren (a neuroscientist) and her colleagues found that there is a particular area of the brain that is activated when people are connecting old and new information (it’s called the medial prefrontal cortex). They also found that how well learners use this area of the brain is related to the future academic success of the learner. We can’t (yet!) put language learners in a brain scanner to find out how well they will learn the target language, but there are findings and developments that are beginning to give us vital insights into learning.

How do we learn? Working memory and long-term memory

Neuroscience is still in its infancy and does not yet have all the answers to this question. To understand how we learn we need to have a basic understanding of how the memory works – and that’s where cognitive psychology helps us. John Sweller is an educational psychologist and with his colleagues he has described how the working and long‑term memory work (see for example, Sweller, 2017). The working memory is extremely limited and this is where we store information for a short period of time, while we are processing it and trying to make sense of that information. We can only keep a few items in our working memories at one time, and when the working memory is loaded or overloaded we need to drop an item before we can take in another item. This has huge implications for teaching, of course. If we try to teach learners too much new information at once in a short period of time it will not be learned well.

This simple experiment shows how previous knowledge (what’s in the long‑term memory) and the working memory work together to help us to remember things.

Look at this sequence of seven letters for 10 seconds and try to remember them and repeat the sequence without looking.

Now try to remember this sequence:

Which one was easier? Well, obviously the second one – but why is that? The first sequence is a random sequence that had to be remembered as seven separate items, challenging the working memory. The second sequence is a common word and therefore is stored as one item in long‑term memory and you can then just spell the word out.

The importance of practice

How do we get information into the long‑term memory? One of the important principles of learning is that new learning is more vulnerable to loss and that we need to use conscious effort to process when we remember and apply new information. The working memory is full when we are applying this effort (remember, it can only hold a few items at a time and will need to drop something to take up something new). The more we practice what we have recently learned the less effort we use and the learning becomes more permanent as an established part of our knowledge schemas. The more we practice retrieving the new information, the stronger the connections become and the more automatic the processing to retrieve the information becomes. Once something is established in long‑term memory we can recall it whenever we need it and we can use it to help in processing new information.

Let’s look at an example from English language learning:

What kind of prior knowledge does the learner have?

In the next section, I’ll outline four simple techniques and strategies that take advantage of what Portuguese and Spanish‑speaking learners of English know already to help them to learn new things.

1. USING PRE-TASKS TO ACTIVATE BACKGROUND KNOWLEDGE
Before we ask learners to read or listen to a text, it is a good idea to do so‑called pre‑tasks, to activate what learners already know about the topic: this means background knowledge of the language required to understand the text and of the content of the text. As mentioned above, research has shown that learners need to understand about 98% of the words in a text to understand it well. Why would we want to give learners a task that is impossible for them to succeed at? Texts that we give to learners need to be graded to be at the learner’s level and we need to make sure that they will be able to understand the majority of words in the text and have some idea of the content of the text before they start reading. In this example (Figure 1), we see how learners think and talk about the topic before they read, but also learn or review some of the vocabulary that is in the text, such as, volunteer.

Because of the history of the development of the Spanish, Portuguese and English languages there are a tremendous amount of words that are cognates, or have similar meanings across the languages. English has a lot more words than Spanish or Portuguese, but because of the influence of the French invasion of England, English very often has two words that mean the same – one with Germanic roots and one with Romance roots from French/Latin – for example, teach (Germanic roots) – educate (Romance roots). Between 30 and 40% of all English words have a related Latin‑based word and 90% of those cognates have the same meaning as in English. This clearly shows that Spanish and Portuguese learners of English have a great advantage over learners from language groups that don’t have a lot of cognates (like Japanese or Chinese). It also means that we can take advantage of this when teaching and show learners the words they will recognise, which will be easy to learn, while focusing more attention on the words they don’t know, which will take more effort to learn.

Knowing that learners already know Portuguese or Spanish allows us also to take advantage of their prior knowledge by predicting what mistakes they will make based on the typical mistakes that Spanish and Portuguese speakers of English make. Figure 3 shows an example of this.

As talked about above, we know that we use what we know already to help us to learn new things, the neuroscientist, Van Kesteren puts it like this, “knowledge builds on its antecedents”. Therefore, it’s important that we constantly refer back to and build on what learners know already. We saw this already in the example of public places above in Figure 2 where learners learn new vocabulary based on knowledge of words in L1 and then go on to learn new semantically related words.

In Figure 4 we see this principle related to learning a new grammar structure. We see how learners compare a previous structure with a newly‑learned structure, making connections between the two and thereby adding to existing knowledge schemas.

We’ve established that the more often new information is remembered (or ‘retrieved’) the more it becomes ‘established’ and less likely to be forgotten or ‘lost’. Therefore, we need to find ways as teachers to help learners to constantly review information that they have learned. A simple and very effective way to do is by practice testing. Now, when we hear the word ‘test’, we often have visions of students under pressure, not sleeping all night and being anxious to perform well. That’s not what we’re talking about here, but rather we’re referring to so‑called ‘low‑stakes’ or ‘no‑stakes’ testing, that is, tests that are not going to have a huge impact on the students’ future or cost money, but ways to help learners to practice retrieving recently learned information so that this information becomes consolidated in the long‑term memory. Research has shown for over 100 years that practice testing is one of the least expensive and effective teaching techniques for improving learning. Practice testing can even take the form of a game. Look at the activity in Figure 5. This is a game for beginner learners to play with the names of the days of the week that they have just learned, but if you look closely you’re see that this is also a type of ‘practice test’, designed to help learners to practice retrieving new vocabulary. Figure 6 is an example of a review practice no‑stakes test that allows learners to simply practice retrieving vocabulary that they have learned in a fun, non‑threatening way at the same time making the process of retrieval more automatic.

In the last fifty years, the fields of cognitive science, psychology and, more recently, neuroscience have offered teachers great insights into how human learning takes place. This article looks at one important principle of learning and how we can take advantage of that principle when teaching language learners. Teaching should always be based on what the learner already knows.

THE AUTHOR Carol Lethaby is originally from the UK and now lives in San Francisco, California, where she is part-time assistant professor on the New School New York online MA in TESOL and honoured instructor on the UC Berkeley Extension teaching certificate in TESL/TEFL. She has lived and worked in Europe and the Americas, including for fourteen years in Guadalajara, Mexico. Carol has authored several textbook series for learners, including most recently, English ID 1 and English ID 2 (Second Editions) published by Richmond ELT, and she is a frequent presenter at international conferences.

• Marzano, R.J. (2004) Building Background Knowledge for Academic Achievement: Research on What Works in Schools. Association for Supervision and Curriculum Development

Always Someone To Talk To

Language education in a changing world - Challenges and Opportunities