Learning Cosmos: A Voyage into the Learner’s Universe

Ever since I was a kid, the stars fascinated me. I looked up at the night sky and wondered. My interest in the mysteries of the cosmos kept growing and by the time I had started high school, I wanted to know more about the universe. Years after, I came across Carl Sagan’s TV series Cosmos. He used to say:

The Cosmos is within us.

We are made of star stuff

Perhaps that’s why it is so fascinating. After all, we are part of it and it surrounds us.

Today I’m a big fan of the remake of Cosmos hosted by Neil DeGrasse Tyson and I’ve just finished re-reading Stephen Hawking’s (1996) Illustrated Edition of A Brief History of Time. You might be wondering why I’m talking about astronomy in a magazine for language teaching and learning. I believe the mechanics of the cosmos is intimately connected with how we see learning.

Think about it for a second. If we consider the multitude of principles, theories and frameworks that address learning, we can compare it to the expanding universe. Different spheres, each one influencing the others. The objective of this article is to design a Learning Cosmos diagram based on what learning entails. My hope is that this Learning Cosmos can help students, teachers, schools, families, and policymakers admire and reflect on the amazing universe surrounding our learners

Physics and how we learn

The laws of physics explain how the universe operates. What would be the equivalent of physics in the realm of learning? What studies its mechanics? I believe the most suitable contender would be the Science of Learning (SoL), a topic I discussed here one issue before the last. SoL, as well as related areas such as Mind, Brain, and Education (MBE), is concerned with how humans learn from a transdisciplinary perspective. We learn from stimuli coming from within our bodies, from social interaction and from the external world.

At the beginning of the 20th century, when Albert Einstein published his Theory of General Relativity, there was a revolution in the way we understood time, space, and gravity. His contribution came around 250 years after Sir Isaac Newton had put forth his own propositions and it gave us the notion of a space‑time fabric that warps around objects with mass. This could be compared to when cognitive psychology, and neuroscience, still in its infancy, came to add to classic learning theories.

Microcosm: The Quantum Mechanics of Learning

Quantum Mechanics originated in the early 1900s from the works of Max Planck, Albert Einstein, Erwin Schrödinger, Werner Heisenberg, and others to study how tiny things work, that is, at the atomic and subatomic levels. This revolution is comparable to our understanding of how genetics and epigenetics impact learning.

Genetics has made such incredible advancements that we can now look at a sample of people’s genetic code and estimate their chances of developing certain diseases, their potential personality traits, and even learning abilities. Robert Plomin, geneticist and psychologist, claims in his book Blueprint that genetics alone accounts for around 50% of individuals’ psychological differences and that academic performance is substantially influenced by it (see Plomin, Haworth, & Davis, 2010).

Since the microcosm is outside our realm of influence as educators (unless we start editing genes in the future with technology that already exists), and it has its own rules, let’s zoom out and focus on a higher level: the level of the individual.

Think about our planet spinning around its axis and orbiting our sun. A pale and minuscule blue dot in the vastness of the solar system. Multiple intricate systems are at play at all times on Earth. The gases that form our atmosphere and entire ecosystems create the biosphere. It harbors microscopic living things, like bacteria and plankton, and large forms of life like Giant Sequoias, elephants, and blue whales, each one in a different habitat.

For our Learning Cosmos, let’s regard the individual (SELF) as a planet. We can think of four categories on the individuals’ immediate surroundings:

Self relates to our learners’ sense of self-worth and identity. It’s about who they are. This should be the main sphere of our Learning Cosmos as we prioritize studentcenteredness. Moving to the next sphere, we can add elements that make up our students’ cognition, that is, the mental processes used to gain knowledge. We should include The Four Pillars of Learning (attention, engagement, error feedback, and consolidation) by Stanislas Dehaene (2020), which overlap with the Engage, Build, Consolidate Framework by Paul Howard-Jones et al. (2018). We can compare the cognitive sphere to Earth’s conditions to support life, such as the presence of liquid water and breathable air.

Our learners’ ability to understand, influence and regulate emotions comes next. Theories such as Emotional Intelligence by Salovey & Mayer (1990), popularized by Daniel Goleman (1995), Emotion Regulation by James Gross & Ross Thompson (2007), and the Theory of Constructed Emotion by Lisa Feldman Barret (2017) belong on the planetary sphere of the Learning Cosmos. They’re like our planet’s climate. Our mood could be compared to Earth’s weather.

Then comes the sphere related to the learner’s attitudes and beliefs about learning. This sphere should contain at least three essential elements:

We could think of Attitudes & Beliefs as the shared knowledge we have about how learning actually works. Failure to grasp some of the basic principles of learning or lack of tools to analyze certain paradigms could lead to practices that have no empirical evidence to back them (or widely held misconceptions such as the learning styles neuromyth) and could be compared to astrology or the notion of a flat Earth.

The outer sphere of our planetary level should be motivation. Richard Ryan and Edward Deci (2000) discuss the role of intrinsic motivation in their Self- Determination Theory and suggest three key factors to promote it: autonomy, relatedness, and competence. Daniel Pink (2011) claims that what really drives people can be summarized into Autonomy, Mastery, and Purpose. This sphere corresponds to Earth’s atmosphere as it is both influenced by what happens inside our planet and what goes on outside of it.

The macrocosm is what we think of when we talk about the universe and the physics of the large. For our Learning Cosmos, it is what’s beyond the immediate surroundings of the self, that is, the things that are not so much within our learners’ realm of influence as they depend more on external factors controlled by others, particularly us, teachers.

Each one of the planets in our solar system is quite unique. Jupiter is the largest one, a gas giant whose volume is more than a thousand times that of our planet’s. It revolves around the sun between Mars’ and Saturn’s orbits where its powerful gravitational influence traps a massive asteroid belt, thus, shielding Earth and other planets from recurrent bombarding. Venus is about the same size of Earth but its proximity to the sun has made its atmosphere toxic and extremely hot, filled with carbon dioxide, and sulfuric acid.

Earth has the perfect conditions to be teeming with life. Its interaction with the sun and other planets in the solar system as well as its location have made our planet special and allowed it to support life in all its beauty and forms. This is exactly how we should think of our learners’ experience. We need to provide them with the best possible conditions so that the design of our lessons allows them to flourish. Let’s call this sphere Learning Design and include the following:

The interstellar level is about other stars and planets in our galaxy. Our Milky Way contains anywhere between 100 and 400 billion stars and it would take anyone trying to cross its diameter 100 thousand years at the speed of light. If we could take a picture of it, it would look like a spiral rotating around a massive black hole, a giant vortex that sucks everything that gets too close (including light). The interaction of all these elements form our context and resources, just like what we see when we think of our schools, their infrastructure, and mindset/policy

As a matter of fact, one of the inspirations for this Learning Cosmos was Urie Bronfenbrenner’s (1992) Ecological Systems Theory. Similarly to what I’m proposing here, Bronfenbrenner illustrates the different contexts that impact an individual’s development in society as concentric circles. Each circle represents a different environmental system moving from the immediate surroundings of the individual (school, home, neighborhood) to the ethos of society and what it values. Therefore, the last sphere in our Learning Cosmos is the Environmental Level

Unlike Einstein’s search for a unified theory of physics, this is certainly not a theory of everything. I left out important developments (such as Flow Theory by Mihály Csíkszentmihályi (/ˈmiːhaɪ ˈtʃiːksɛntmiːˌhɑːjiː/), and jargon on how we learn (such as Long-Term Potentiation). My goal was to condense as much as possible into a logical illustration that can be used by educators/teachers when reflecting on the complexity of learning.

Think of the Learning Cosmos as a useful guide that could work as a reflective tool for you to assess why learning might not be taking place. Its purpose is to allow you to ask whether the problem is on, let’s say, the emotional sphere or the cognitive one (or likely both). It may encourage you to consider all these authors and theories the next time you want to work on your professional development or when you plan and deliver your next lesson.

We must remember that each term inside our Learning Cosmos is a small universe on its own and, depending on our level of analysis, we can be more generalist or more thorough. We could look at things more closely (Self-Efficacy can be broken into enacted mastery, vicarious experience, verbal persuasion, and emotional state (Bandura, 1997) for instance) or we can zoom out and look at the Motivational Sphere as only Intrinsic Motivation. We could even add Extrinsic Motivation to that level. I suppose it will all depend on the level of detail we want for our intended purpose at hand.

Here’s my final message and invitation to you all: the Learning Cosmos is open to your reflections and ideas of what should be included, what might overlap, and what should be removed or changed. Our knowledge about the universe is being constantly updated and new models are proposed all the time. I only ask you not to look at this framework (or any, to be fair) as a prescriptivist and deterministic tool that you can use to label your learners. That’s not its purpose. I don’t think we could ever transform this into a psychometric scale to assign a score to the learning experience at any given school. Look at the Learning Cosmos the same way I look at the Cosmos: with humility, curiosity, and awe. When we realize the magnificence of the universe and how only part of it is observable to us, it helps us understand how incredibly lucky we are to exist.

Learning is beautifully intricate and we have only begun our voyage of self-discovery. The implications of our findings will shape generations to come. Our unmatched ability to learn has given us the tools to understand the universe and learning itself. Just remember two things: 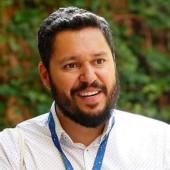 André Hedlund is a Chevening Alumnus (MSc in Psychology of Education - University of Bristol) and former National Geographic Learning Consultant and Materials Reviewer. His work includes teacher education for Academy of Distinction (Italy), Gallery Teachers (Europe), and Amolingua, with several international projects including LINGO+(awarded Erasmus+ funding). André is a Bilingual Program Mentor for Edify Education and a guest lecturer on Multilingualism, Global Education, and Neuroscience at PUCPR. He is also a member of the BRAZ-TESOL Mind, Brain, and Education (MBE) SIG, and he blogs at edcrocks.com

English Grammar in Use - Disal Indica